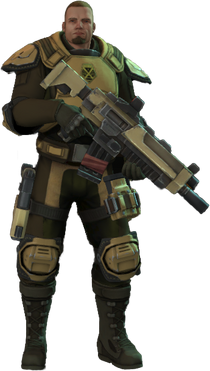 The Support Class is a soldier class in XCOM: Enemy Unknown.

The primary role of the Support Class is to keep the team alive and/or provide covering fire. They can learn to use Medikits more efficiently, cover the battlefield with smoke grenades and run further than other classes. Their covering fire and suppression abilities can help control enemy movement on the battlefield.

The Support Class is a mid line specialist that excels in sustaining squad members in fighting condition with sustained fire from cover.

The Support Class can be equipped with rifles and pistols.

When a soldier is promoted, certain ranks allow the player to choose between one of two abilities.

Retrieved from "https://xcom.fandom.com/wiki/Support_Class_(XCOM:_Enemy_Unknown)?oldid=48017"
Community content is available under CC-BY-SA unless otherwise noted.