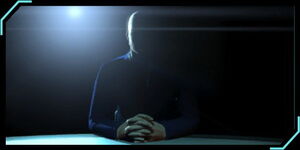 The Council consists of the group of 16 countries that created XCOM and who continue to fund and support the organization. The Council, represented by its mysterious shadowy spokesman, will make regular contact with the Commander (the player) via the Situation Room.

The Council has three primary reasons to contact XCOM:

At the end of each month, The Council issues a report that details the XCOM Project's successes, failures and the global panic levels. Each council member nation has a 5 bar panic level scale which increases if alien activity occurs in that country or parent continent that the player ignored or failed to contain. This scale can never go below 1 bar or go beyond 5 bars.

The Council Report is transmitted to XCOM at 0000 hours (12:00AM) on the first day of each month. Upon receiving this report, the in-game clock is paused while the transmission is decoded and the player reads the results. Once the report screen is dismissed, the clock is unpaused.

Aside from the loss of potential income, losing any nation disqualifies the player from the continental bonus of the continent the nation was part of; the host continent the XCOM Project is based in being the exception, as all Council Nations in the host continent need to pull out before its continental bonus is lost. If at least eight Council Nations pull out of the XCOM Project, the game ends in a defeat.

Coinciding with the monthly Council report and letter grade, the Council distributes funding to XCOM; these rewards are based primarily on which Council nations have satellite coverage and have not left the Project.

If you allow eight countries to leave the XCOM project, the game will end, and you will see a cutscene; the council spokesman will call this entire endeavor ill-conceived and will terminate the project by pressing a button while Vahlen, Shen, and Bradford look at the Situation Room screen turning off, defeated. It is revealed the spokesman is under Mind Control by a Sectoid Commander, and a Thin Man places its hand on his shoulder before the scene ends.

In this timeline, XCOM is unable to defeat the alien threat, resulting in a global invasion of the planet. Subsequently, the Council chooses to terminate XCOM either before or after the organization's headquarters is attacked and destroyed by the aliens, resulting in the kidnapping of the Commander. The Council Spokesman and his fellow Councilors swear loyalty to the ADVENT administration, receiving lofty positions within the organization as a reward.

Unbeknownst to his colleagues, the Council Spokesman continues to remain loyal to XCOM's cause, becoming their Informant within the administration once XCOM returns to fight for humanity twenty years after Earth falls. Bradford comments on the Council at random during the campaign, noting that he is actually happy about the Council's disbanding, since there is no need to keep them satisfied anymore, XCOM now has significantly more freedom in how to operate.

Near the climax of the game, it was soon revealed that ADVENT Troopers are attempting to breach into The Council's hideout, with The Spokesman brandishing his handgun and fending off ADVENT Troopers before the signal abruptly cuts off.