Edit
watch 01:47
XCOM 2: War of the Chosen - Inside Look: The Hunter
Do you like this video?
Play Sound

The Assassin, The Warlock (genetic siblings)

XCOM 2: War of the Chosen

Both his name and insignia are randomly generated for each playthrough. Click here to generate another set.

The second of the Chosen created by the Elders, the Hunter was designed to be an unequaled military tactician, one able to predict and defeat the increasing number of guerrilla attacks conducted against ADVENT by the Resistance. He has long pursued the Reaper faction, his arrival coinciding with the disappearance of one of their greatest operatives. The Hunter has an uncanny familiarity with the Reapers and their methods, leading some among the group to believe that he is in fact their long-missing operative. However, most among their people will insist it's only a trick of the Elders intended to demoralize the Resistance.

"Assignment: Stationary guard posting; City Center 47, Gene Therapy Clinic A-2, Theta-B Secure Lab. Block hours: 168, all activity within designated program as expected. Block-B, Hour 76: Recorded suspicious verbal communication between human civilian designated 0083 and 7689 as follows: "0083: You realize what they're doing to him, right? The data he's receiving... it's not just... 7689: Why are you even talking about that? Don't ask questions, you'll live longer. 0083: Think about what it must be doing to his psyche; he's a man, not a machine...it's an endless war in there. 7689: I'm telling you, you're asking for trouble. Drop it." 0083 and 7689 secured for reeducation per Theta-B access doctrine."

"As requested, my formal update on subject "T" is to follow, but for now I can briefly speak as to his progress as identified by doctrine guidelines. Now approaching the end of his second conditioning pass, including full access to the ADVENT tactical archive, our subject has shown an overall retention rate well above accepted returns. Although initially scheduled for five complete passes before field trials, I believe it may be an unnecessary delay in his progress. Worth noting, his personality has begun to exhibit changes that can only be attributed to the wealth of newly acquired information that now...END OF FILE FOUND."

"OFFICER-K341: KRACSAD! ...UNKNOWN: Why did you even waste my time calling me out here? I didn't need to see this to tell you how it would play out. UNINTELLGIBLE: ... UNKNOWN: I suppose I could have told you, you were only a few seconds from eating a bullet. But where's the fun in that? The Elders can just make more of you anyway."

"I figured it was only a matter of time before you asked about him. For a while I tried to suppress the rumors, figured all this talk of a "Hunter" rivaling one of our own people had to be bad for morale. But even I underestimate my people sometimes, 'cause now they're all looking to get a piece of this prophetic stalker who seems to know all of our moves before we make them. I'll send you the scraps of intel we've pieced together so far. -VOLK"

"Volk...signal lock is struggling...you need to get this ...we actually saw the ...thing! Hold on - there - Volk, I think it's him! He took a shot at us from what must have been a mile off, and when we turned around, there he was right in front of us. We had already wiped out a whole squad of ADVENT by then, and he didn't even move to stop us. I don't even know why he let us live...do you think it could actually be you know who...?"

"From that distance, he had to have taken the shot before I even started moving. Do you know what that means? He shot where I was going. He KNEW where I was going...before I had even decided to make a run for it. How can that be?"

"If that thing wasn't dead set on killing us, I'd have said he'd make a great recruit. From the way he talks, you'd think he was already one of us. You think he's been watching us all this time?"

"I didn't think anything serving the Elders was capable of insubordination, until I heard that thing rambling on in the woods one day. I honestly think it's just in this for the fight itself.""

The Hunter is a Chosen who could be considered the equivalent of a sniper; his long sight range and Tracking Shot ability make him a formidable force at long range, while his Darkclaw pistol allows him to deal with unsupported enemies at close range.

Like the other Chosen, he may appear on missions that take place within his territory in order to disrupt the XCOM operations, bringing his long range prowess in addition to the enemies already on the battlefield.

Outside of a combat mission, he is able to gain knowledge, sabotage The Avenger, along with other actions to disrupt XCOM's strategic plans.

Main article: The Chosen#Knowledge and Sabotage

Farsight: The Hunter can see, and target any non-concealed XCOM unit if they have line of sight, no matter how far apart.

Tracking Shot: The Hunter, if not in range of any soldiers, will mark a soldier from his position in his line of sight. The soldier will have a single turn to move out of the Hunter's line of sight before being shot.

Rifle Shot: When the Hunter is active, he is capable of firing at any soldier with his Darklance rifle. This attack will cause Bleeding.

Pistol Shot: At close range, The Hunter will use his Darkclaw pistol to fire a shot. This attack will cause Bleeding.

Tranq Shot: The Hunter can fire his pistol at a soldier, dealing no damage, but Dazing them.

Grapple: The Hunter has a grapple to move to far away high ground locations. Like XCOM's grapples, this is a free action, but unlike them the Hunter's has no cooldown. This movement will not trigger proxmity-based skills such as Bladestorm or Retribution.

Concussion Grenade: The Hunter can throw a grenade that will Daze all soldiers in the blast radius. Usable once per mission.

Extract Knowledge: The Hunter may extract knowledge from an adjacent dazed target, increasing his knowledge after the mission ends. The Hunter will teleport out of the mission after extracting knowledge.

Kidnap: The Hunter may abduct an adjacent dazed target, causing both him and the soldier to teleport out of the mission. The soldier abducted will be lost until rescued via Covert Action.

Main article: The Chosen#Strengths and Weaknesses

Strengths are procedurally generated over the course of an XCOM game, but there are notable mentions when paired to The Hunter:

Planewalker: Having this strength can make any Chosen difficult to pin down, but it's especially prevalent for the Hunter as they will often teleport outside of attack range in order to get the distance advantage. Combat this by spreading out your soldiers to make sure you always have a shot on The Hunter.

All Seeing: Despite the Hunter's apparent ability to target any soldier on the battlefield with his Farsight ability, he cannot use this ability to reveal any unit within his line of sight unless the Hunter is actively fighting them.

Main article: The Chosen#Strengths and Weaknesses

Weaknesses are generated randomly, and unlike Strengths they are paired with only two for the entire game, but there are notable mentions when paired to The Hunter:

Brittle: This adds to the Hunter's close range vulnerability. Any targeted attack within 4 tiles will deal extra damage. If the Hunter does not have Immunity: Melee, having a Templar or Blademaster Ranger makes it easy to take advantage of this.

The Hunter's attacks with his rifle or pistol will cause the Bleeding status, causing the target to take 2 damage a turn. Combined with the massive damage his rifle can do, This effect will likely take out a soldier in a few turns. It may be a good idea to bring a Medikit or a Specialist with the Medical Protocol ability to cure the bleed.

The Hunter's Grapple and Tracking Shot will cause him to try to get as much distance as possible between himself and the XCOM forces. Therefore, the ideal combat situation is to have multiple soldiers engaging him at close range; he is quickly overwhelmed when he cannot take advantage of long distance combat.

However, his Tranq Shot will quickly befell any individual soldier in sight range, where they could potentially be abducted, so it is ideal to have backup for your soldiers if they split up to engage the Hunter or equip soldiers with Mindshields.

As with all Chosen, it's ideal to keep your soldiers out of a Daze if possible; they could end up being abducted or they could have knowledge extracted from them. Killing the Hunter will also break all soldiers out of a daze if they are in one, so dealing with him quickly is an option if you are out of range to Revive a dazed soldier.

The Hunter will reward you with two weapons after killing him permanently. You will need to research them with Tygan before you can put them to use with your soldiers. 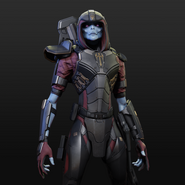 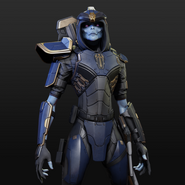 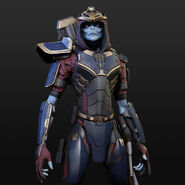 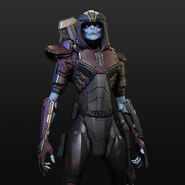