A Thin Man is an alien in XCOM: Enemy Unknown.

Thin Men are unnervingly human-looking aliens who apparently serve as infiltrators for the invaders. They have short black hair and wear blue suits. While they might initially pass as human, their elongated bodies and unnatural flexibility betray their true nature. Closer inspection also reveals several patches of mottled green skin around their wrists and neck, and reptilian eyes hidden behind black sunglasses. They are very agile, capable of covering great distances in a single turn. Able to flank opponents and use cover, Thin Men also have the unique ability to unhinge their jaws and spit poison; this is the same poison expelled from their bodies when fatally wounded.

Thin Men are known for their high accuracy when firing their Light Plasma Rifle; on Classic or Impossible difficulty, it may appear as if the Thin Men never miss a shot. In the early phase of the game players should exercise caution and avoid situations where they are exchanging fire with Thin Men in good cover.

Thin Men are a staple of Council missions throughout the entire campaign. They can appear in other mission types in lieu of Sectoids beginning in the second month (April), regardless of the game's "Marathon" Second Wave option. Their chance of being deployed in non-Council missions declines over June and July (Marathon: from August to October), to a very low late-game rate on par with Floaters and Seekers. They are not encountered during terror missions. 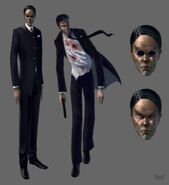 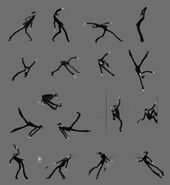