Titan Armor is a type of body armor in XCOM: Enemy Unknown.

In XCOM: Enemy Within, the sealed property is amended with "and airway interruption."

Titan Armor has the game's largest health bonus, and unlike other late-game armors, is quite affordable for its quality. It can easily be produced for an entire squad and may become a staple for XCOM's soldiers. Combining this armor with Chitin Plating can turn a Heavy or Assault soldier into a walking juggernaut and make them extremely difficult to dislodge from cover; this can be further augmented by the two class abilities that are unlocked at the rank of Major rank: Will to Survive (Heavy) and Extra Conditioning (Assault).

The fire immunity does not protect a soldier from damage caused by explosions (including vehicles) beyond the health bonus it provides, as explosions are considered concussive damage. The value of fire immunity is questionable, as burning areas tend to be scarce (depending on use of explosives), usually provide no cover, and can often simply be avoided. One exception is the Flamethrower available to MEC Troopers; the MEC does not have to worry about friendly fire if nearby soldiers are immune.

The immunity to poison may also be of questionable relevance. Poison is most dangerous at the beginning of the game when Thin Men and Chryssalids are plentiful, and Medikit production/uses are limited. Typically by the time Titan Armor can be manufactured, poisonous enemies are less common, the 3 HP loss may be considered trivial (more so on lower difficulties), and Medikits are plentiful. Poison immunity may still prove useful during late-game Council missions which are often infested with numerous Thin Men. However, being poisoned may be preferable if the Aim/movement penalties are a minor concern to the player, as the raw damage sustained from a Thin Man's primary weapon is significantly greater than poison damage, and they will not attempt to use Poison Spit against an immune target. This is not the case with Chryssalids, as their Poisonous Claws inflicts poison in addition to their base damage, and being immune does not modify their behavior.

As of XCOM: Enemy Within, Titan Armor is no longer the only armor type which grants fire and poison immunity. These benefits are also conferred by Archangel and Ghost Armor.

Class-based differentiation collected to one place. Due to the simple straightforward nature of the strategic enhancements provided by this protection, unlike the articles of other Armor Suits, this one will be short and will concentrate not on one of it's main aspects the HP bonus, but it's alternate implications and the more characteristic immunities. This is also a unique section slightly mentioning other more suitable armors at classes where available according to previous studies, which are even though justified, they do gain a certain level of subjectivity (which in turn is mentioned here to maintain legitimacy) by the lone fact, that is the marginally relative interchangeability of the armors on classes. Thus, the reader must excuse certain liberties.

CON - None! ...aside from having no special (greater) tactical abilities.

PRO - The best protection for frontal assault with a frequently used Assault soldier, added health bonus might even support a kind of tanking strategy. Although if one is uninterested in the added health stats, one might find better use of a lot of other armors that are having a more distinct tactical addition. For example if one "commander" decides to follow a style of playthrough distinguished by only building one of each and every Armor and (protection) Item - either for resource optimization purposes or just for a gameplay theme - , considering prior analysis of classes and armors, an Assault's arsenal might be more drawn towards using Skeleton Armor after it has outlived it's usefulness with other classes. (Of course it is made obsolete when and if obtaining Muscle Fiber Density, although the aesthetically pleasing visual distinction remains to good fortune.)

PRO - It is worth mentioning, that Extra Conditioning is most well utilized here and Resilience adds a unique twist to immunities. An Assault at Major rank equipped with Titan Armor and Chitin Plating will have 18 bonus health.

PRO - Fire immunity enables the Assault to wade through tiles that are on fire to lead an offensive. Especially since the best elevation changing tactical "equipment" an Assault can use is arguably Muscle Fiber Density which relies on freedom of movement.

PRO - Strangulation immunity protects from Seeker attacks, which is useful for the second most secluded soldier class in the squad.

CON - None! ...aside from having no special (greater) tactical abilities.

PRO - Even though the movement bonus of Ghost Armor pretty much urges the Heavy to use it instead, temporarily Titan Armor is great protection for a Heavy soldier often used in the front lines.

PRO - Will to Survive can further ensure the survival of the individual.

PRO - Poison immunity enables the Heavy to find a firing spot in a poison cloud.

PRO - Strangulation immunity defends the Heavy from Seeker ambushes, even Heavies tend to be a rare target due to their placement.

CON - Titan Armor might be more than just a little overkill for the class, it offers a high level of protection normally unneeded for a Support.

PRO - Even though Psi Armor finds its own effectiveness range most at home on a Support soldier, Titan Armor offers more than adequate protection both for supporting fire and medical-oriented rescues. Furthermore having more HP means less need to use Medikits on themselves.

PRO - Besides having high HP, being engulfed in smoke increases survival. This involves Smoke Grenade, Smoke and Mirrors, Dense Smoke, and/or Combat Drugs.

PRO - Titan Armor protects the soldier which has several much needed items which are multiplied by Deep Pockets.

PRO - Fire immunity enables the class to rush to the wounded through areas denied by fire for other personnel.

PRO - Strangulation immunity disallows strangulation by Seekers, which can come in handy even for this class, which is not the most frequent target.

CON - Almost fully useless for all Snipers, even Snap Shot-oriented ones. The extreme level of protection is not put to good use with a class that is so distant from the main line of fire. Archangel Armor, Skeleton Suit and Ghost Armor are more at home on this class.

CON - Poison immunity is most certainly not going to be made use of with this class. The Sniper usually stays clear of Poison Spit range, and rarely is hindered by lingering poison clouds. No hostiles in the game ever use Gas Grenades, the player just needs to be mindful of friendly fire.

CON - Strangulation and poison immunities can be obtained ealier and cheaper with the use of the Respirator Implant, though either costs the Sniper their item slot. Pure strangulation immunity can also be bestowed without costing the item slot with Bioelectric Skin.

PRO - Finding high ground does usually mean not getting enough cover. The bonus HP stats ease on this stress, and additionally complement Low Profile, and supports liberal use of Damn Good Ground.

PRO - Fire immunity makes it possible to acquire sniping spots which are actively on fire. Although due to the rare movement attributed to the class, these will mostly be ones that were already on fire when the level started, rarely ones that formed during gameplay, this in turn further decreases usefulness.

PRO - Strangulation immunity disables the Seeker strangulation attack, which is really useful, because secluded Snipers tend to be the most frequent of their targets.

PRO - For a Sniper frequently using pistols, and if getting into a tough situation, the bonus HP seems to work well with Gunslinger.

Artwork showing the Titan Armor variations based on weapon technology and soldier class. 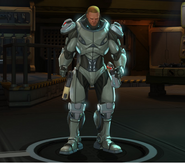 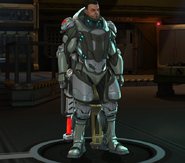 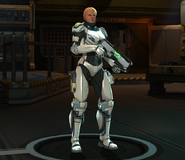