After years of alien rule, humanity won the war for Earth. But when the Overlords fled the planet, they left their former soldiers behind. Now, five years after the events of XCOM 2, humans and aliens are working together to forge a civilization of cooperation and coexistence.

Welcome to City 31, a model of peace in a post-invasion world. However, not all of Earth's inhabitants support interspecies alliance. Chimera Squad, an elite force of human and alien agents, must work together to destroy the underground threats driving the city toward chaos.

Your agents are unique: each of them equipped with special tactical abilities and driven by a different motivation for joining Chimera Squad. Deploy targeted team members to investigate and combat the dangers that pervade the districts of City 31. Lead Chimera Squad through a new experience that innovates on XCOM's turn-based legacy, utilizing strategy, teamwork, and new breach-and-clear gameplay to complete your mission objectives.

The future of City 31 depends on you.

XCOM: Chimera Squad is the fourth game in the modern XCOM timeline it takes place 5 years after XCOM 2. It focuses on the efforts of Chimera Squad, a special division of XCOM sent to City 31 to protect the peace and go against armed criminals the local police can't handle.

XCOM: Chimera Squad focuses on the Chimera Squad's role as a peacekeeping force throughout City 31. Tactical Operations take place in various sectors of City 31, and each Sector will be measured by its current state of unrest. If too many Sectors fall into anarchy, then the Chimera Squad has failed to meet its objective and their mission is lost.

Each Operation is divided into Encounters. At the beginning of each encounter is a new gameplay element called "Breach Mode". This allows players to plan how Agents will enter combat through breach points. This can be done by breaking through windows, barging through doors, sneaking up on the enemy, or utilizing paths accessible only to certain Agents (e.g. Torque might be able to slither into a vent that no other Agent can access).

Combat in Chimera Squad takes place in one single timeline, displayed on the player's screen. Decisions about which orders to give Agents will rely on the players ability to predict enemy actions.

Players can use an Agent's abilities to enable another Agent in the timeline (e.g. by using Axiom to smash a piece of cover being used by an enemy to allow another Agent a clear shot).

If an Agent takes too much damage during combat, they will be temporarily disabled and another Agent will need to stabilize them before they die. Losing an Agent results in the failure of the mission.

If an Agent sustains too much damage in the field, they will develop scars and their future performance will be negatively affected. Running Agents through the training program, which takes them out of battle for a time, will allow them to recover to their initial performance, and may even grant them permanent boosts.

The Assembly is the primary method in which new equipment can be unlocked for use by Chimera Squad's Agents.

XCOM: Chimera Squad features a variety of human and alien adversaries to fight against within City 31. 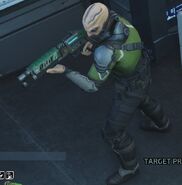 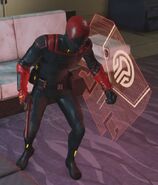 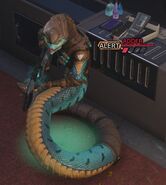 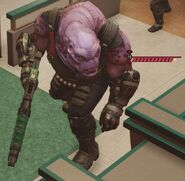