XCOM Base Defense is a new essential mission introduced in XCOM: Enemy Within. This mission carries the official designation of Operation Ashes and Temples.

This mission occurs 10-20 days following the Alien Base Assault mission. While in Mission Control the Hologlobe will begin to behave erratically, followed by a cutscene where multiple XCOM personnel, under the influence of alien Mind Control, commit acts of sabotage and violence. The mission is launched immediately following the cutscene, without an opportunity for the player to choose and equip the squad members.

This mission takes place on a unique map detailing the expansive XCOM HQ Delta Section, an area of the XCOM headquarters located behind Mission Control. The areas of Delta Section are identified as alien reinforcements arrive throughout the mission. Together they form an elongated rectangular shape consisting of a Rear Guard Station, Command Center, Mech Bay, Forward Access Tunnel, and Forward Guard Station.

The number (as many as 44 on Normal and Classic) and type of enemies vary depending on the stage of the alien invasion, similar to the Alien Base Assault. The exact composition of the alien force that the player faces is mostly randomized (as well as some of the alien spawn points). The alien force is randomized again when a player restarts the mission after failure, meaning that each attempt at base defense plays out differently.

The mix of aliens during base defense is not normalized, meaning that a player may face an "easier" mix with more Sectoid thrown in, or a harder mix with stronger aliens. It is possible for this mission to feature every alien type with the exclusion of Outsiders. The Ethereal or Sectopodcan potentially be introduced here instead of the Overseer Crash Site. 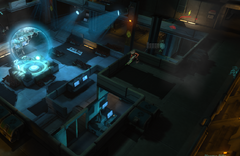 The following status updates are received from Central Officer Bradford during the mission:

This mission serves to advance the main plotline and offers only the Star of Terra medal as a reward, in addition to any recovered alien corpses, weapon fragments or any captured aliens (and weapons).

Completing this mission awards the "They Shall Not Pass" achievement.

A Base Security officer targets a Chryssalid in the Commander Center.

A Base Security officer fires at a Sectoid in the Mech Bay. 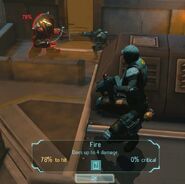 XCOM Base Security take on a Berserker.

Make the aliens regret their attack...

... but don't let your troops get out gunned.