A Zombie is an alien in XCOM: Enemy Unknown.

Zombies are undead infantry, similar to their depictions in other media.

When a Chryssalid kills a human, it lays a Chryssalid egg into the chest of its victim. The embryo twines itself with the central nervous system of its host and overrides locomotive control, creating a Zombie. The turn after the victim has been killed, the Zombie will rise up and attempt to attack any nearby enemies.

A Zombie can only slowly shamble towards their targets but has a surprisingly powerful melee attack, between a Chryssalid's and a Berserker's. If a Zombie is still up after three turns, it will burst apart as a new Chryssalid is born. Be warned, this Chryssalid "Hatchling" can move and attack the turn it emerges.

Zombies cannot take cover and are not Hardened, so they make easy targets. They pose no ranged threat but have a powerful melee attack (6 damage on Normal and 9 on Classic with a chance to poison). Fortunately, zombies have very low movement and tend to wander aimlessly if there are no readily available targets.

A player should keep their soldiers at a distance and take zombies out from afar before 3 turns pass or the Chryssalid egg inside them will hatch. On Terror Site missions, Zombies will almost never attack civilians – especially if soldiers are visible –, possibly leaving them for Chryssalids to implant or because the embryo within the zombie attacks out of self-preservation and civilians are no threat to it.

One very easy way to deal with a zombie is explosives. Fire a rocket or throw a grenade at a human just killed by a Chryssalid and the zombie will never get a chance to rise. In XCOM: Enemy Within, humans killed by Chryssalids will still rise as Zombies even if explosives are used on them.

Zombies cannot be selected in Multiplayer mode but can be spawned if a Chryssalid kills a human opponent. These zombies fall under the Chryssalid player's control and can be very useful as surprise after sending a Chryssalid on a kamikaze run.

Stage 1: A Chryssalid finds and kills a victim

Stage 2: The Chryssalid "impregnates" its victim by laying an egg in the corpse's chest 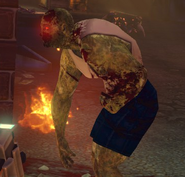 Stage 3: The Chryssalid embryo couples itself to central nervous system of its host, takes over the body and becomes a "Zombie"

Stage 4: In short period of time the Zombie will burst apart as a new Chryssalid is born

A Zombie civilian kills a soldier 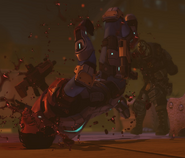